FOUNDER ANITA GÖDIKER GIVES UPDATE IN THE MIDDLE OF THE PANDEMIC 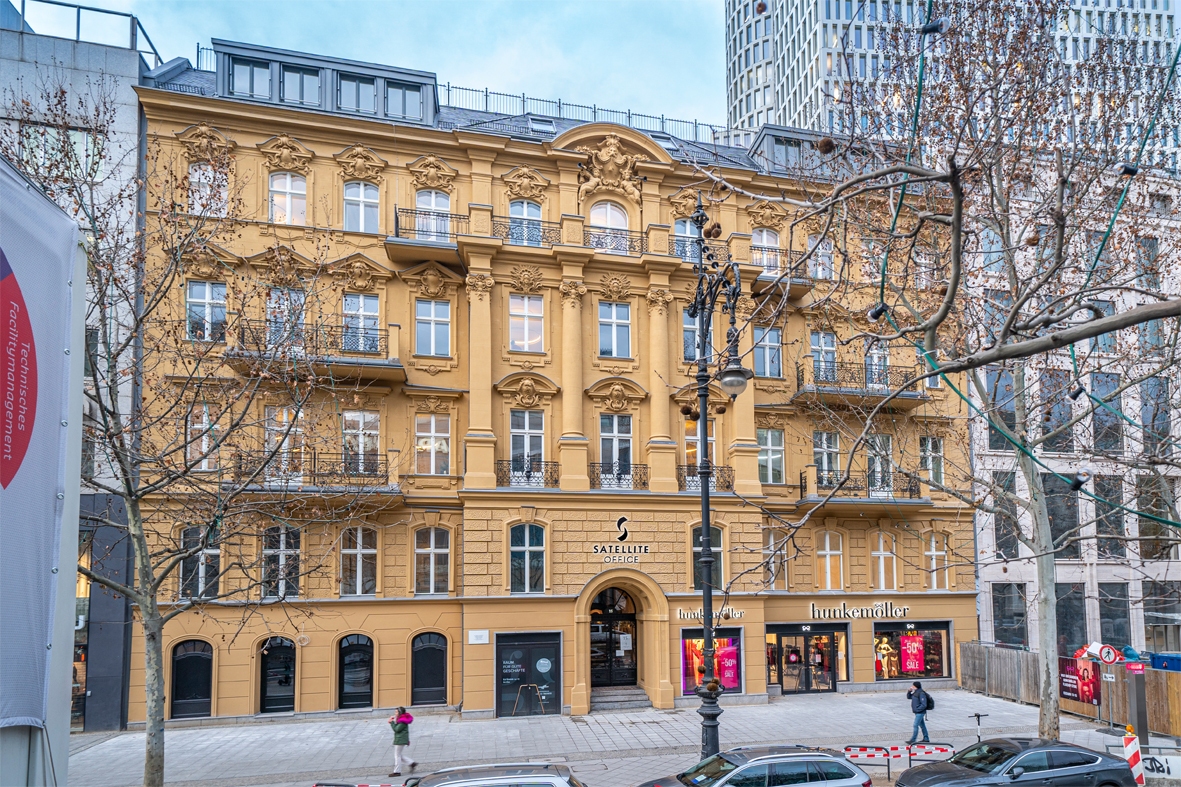 Berlin, February 23, 2021: Satellite Office opens its fourth office for flexible working in Berlin with “KUD15 Gloria Berlin” in the immediate vicinity of the Gedächtniskirche. The property was renovated and restored to all its Wilhelminian splendor. It is the company’s eleventh location in Germany and Switzerland. Satellite Office, founded 24 years ago in Berlin by Anita Gödiker, is going its own way with the new workspace.

“If Berlin wants to play a role and continue to attract companies, there has to be room for all the companies that are not poor and sexy,” she said. Also against the background of the Brexit, we would like to offer these companies a new starting point for start-ups and branches. With our elegant furnishings, aimed at concentrated, quiet work in an upscale environment, we are going our very own way beyond the mainstream in the workspace sector. Just like all the strong women of Berlin, who will experience a tribute to their courage and pioneering role in the new Satellite Office,” reports Anita Gödiker. Alongside Marlene Dietrich and Hildegard Knef, Berlin icon, globetrotter and entrepreneur Heidi Hetzer also finds her place in the new Satellite Office. “It is my concern and pleasure to name one of the conference rooms in this iconic Berlin property after Heidi Hetzer,” continued Anita Gödiker, who was a personal friend of the legendary Opel dealer for over twenty years.

The ensemble of buildings on the lower Kurfürstendamm near the Kaiser Wilhelm Memorial Church tells a good piece of Berlin history in the old West Berlin and is thus an important contemporary witness. From 1917-1986, the famous Berlin pub “Mampes Gute Stube”, where Dr. Carl Mampe once brewed the famous bitter liqueur “Mampes Halb&Halb”, was located in today’s Satellite Office. In 1926, the “Gloria Berlin” was opened in this area as a luxury cinema. In April 1930, the premiere of “The Blue Angel” with Marlene Dietrich as Lola Lola took place here. Hildegard Knef also frequently strolled the red carpet of the storied cinema. Conference rooms, fireplace rooms and lounges named after the ladies can now be booked in the new Satellite Office.

Likewise, 159 workstations and 42 offices can be occupied for days, months or years. The noble, elegant, detailed décor is mindful of colors, light and materials. The interior design reflects the luxury and strong women of Berlin in the golden 20s. Anita Gödiker therefore also calls it the “House of Berlin Stories”.

Despite the pandemic, the medium-sized company Satellite Office opened three new locations in the last twelve months: Frankfurt (February 2020), Hamburg II (June 2020) and now Berlin IV. In Düsseldorf, the space has been doubled from 850 sqm to 1,700 sqm and has been ready for occupancy since last year. The workplaces in all Satellite Offices are characterized above all by high flexibility and security. The “pureSilent” room concept, which, however, predates Corona, is designed to provide sufficient distance, quiet and space. With a free choice of terms from hours to years and workstations ready for immediate occupancy, Satellite Offices meet current needs more than ever. Teams can grow quickly with Satellite Office, but also immediately adjust downward and dynamically combine with home office. Only what is needed is paid for.

With the rapid demand for perfect video technology behind them, smart “digital rooms” have emerged. Small units with state-of-the-art video technology and high-capacity Internet for shorter, digital meetings with no background noise, no distractions, no listeners, but with elegant furnishings, good air and good light. Communicating in small groups, alone or up to four people all over the world is currently very much in demand. Agreements, negotiations or completely confidential discussions are conducted in the Digital Rooms in compliance with all hygiene measures.

Anita Gödiker: “I think so. And in several directions. I imagine there will be less need for conventional, business rental space because we will continue to be more hybrid and remoter post-pandemic. More combination of home office and office will probably catch on and makes sense for many reasons. If this significantly reduces the need for jobs in companies and makes them more flexible, then companies like us come into play. So there will be shifts there. Also, in the long run, companies will consider splitting high potentials into different teams for security reasons, as we will have to live with (corona) viruses. Many are already in the home office or come to us. Man is a social being who needs contact with others. Moreover, in the long run, few workers have the optimal conditions at home to work there five days a week. Again, we see people who are condemned to home offices renting an office out of their own pocket to escape the home environment. The workstation in the home office, often consisting of a folding chair and ironing board, is also unacceptable and leads all the highly praised workplace guidelines up to this point straight to absurdity. So there’s still a lot of room for improvement in the glorified home office landscape. In particular, I consider a state regulation on home offices to be polemic and political bluster in the election campaign. So there will be a lot going on, let’s stay excited and work on good solutions.”

Made in Berlin! Exactly 24 years ago, the company was founded by Anita Gödiker in Berlin in February 1997. At that time, the idea of sharing office space – also for cost reasons – was central. Over the course of more than twenty years, Anita Gödiker has consistently developed the Satellite Offices beyond the traditional “business center”.

In 2010, coworking areas were added to the business centers. The interior design, which was rather traditional at the beginning, was designed by Gödiker to be more modern and luxurious with each new location. The “pureSilent-Line”® was launched in 2019. The new concept combines elegant design with a clever room system that focuses on absolute tranquility for working as well as sufficient space and protection. Whether in a single office, in open space, in meeting rooms or in the new, high-tech digital rooms. Satellite Office is now the luxury brand in the flexible office sector with eleven locations in Munich, Berlin, Hamburg, Düsseldorf, Frankfurt and Zurich. More than 6,000 companies use the broad, flexible range of services offered by Satellite Offices – from international corporations to ambitious start-ups.

Stuttgart gets a Satellite Office

Turning point in the middle class

Flexible workplaces on the rise. Companies are rethinking and restructuring office space.

Satellite Office continues to expand in the Swiss market